Swedish developer NetEnt have joined forces with ITV and Gordon Ramsey, a well- known Celebrity chef and global restauranteur,  to create a slot game  which will be based on the chefs colourful career and famous catchphrases.

Gordon Ramsey is known worldwide as the TV chef who tears a strip or 2 of failing restaurant owners with his colourful vocabulary and then tries to help them turn their business from losses into profits. His TV show Hell’s Kitchen and the spin off Hell’s Kitchen USA proved to be very popular with viewers. 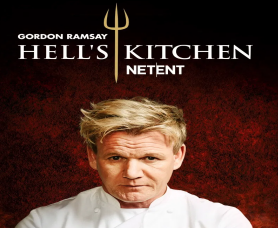 Hell’s Kitchen will be the latest addition to NetEnt’s growing portfolio of branded slots and will include images of tasty food as well as Gordon’s famous catchphrases which we will all be familiar with.

“ NetEnt’s commitment to entertainment has made it a clear leader in the online casino industry and we’re thrilled to support the company with the addition of Gordon’s branded title.”

NetEnt’s Director of games, Bryan Upton commented on the deal,

“ Gordon Ramsey is a true rock star of the restaurant world. His strong personality and use of colourful vocabulary as front man of Hell’s Kitchen have earned him legend status as a multi-Michelin starred celebrity chef, with fans all over the world. Just as importantly, this allows us to produce a true slot with strong narrative and a lot of adult fun! We can’t wait to see what our players think of what we have in store for them.”

Hell’s Kitchen will follow in the footsteps of many famous celebrities in the music and entertainment business including Conan, Ozzy Osbourne, Guns N’ Roses, Jimi Hendrix, Narcos and Vikings to name but a few. We can’t wait to see what sort of tasty treats will be offered in Hells’ Kitchen.