You are here: Home / Bingo News / Duke And Duchess Of Cambridge Call Bingo For Care Home

Duke and Duchess of Cambridge call bingo for care home

OK, we’ve heard some brilliant bingo stories since we’ve been in lockdown, from locals arrange charity games, to A-list movie stars calling the numbers, and now the Royals are joining in with the fun as William and Kate, the Duke and Duchess of Cambridge, turned their hands at bingo calling!

Never afraid to roll up their sleeves and get stuck in, the Duke and Duchess of Cambridge, William and Kate, turned into online bingo callers for elderly residents at the Shire Hall Care Home in Cardiff. William and Kate joined the online bingo game from Amner Hall, their residence in Norfolk, and Kate took charge of the bingo machine as her and Prince William took turns to show the numbers drawn. 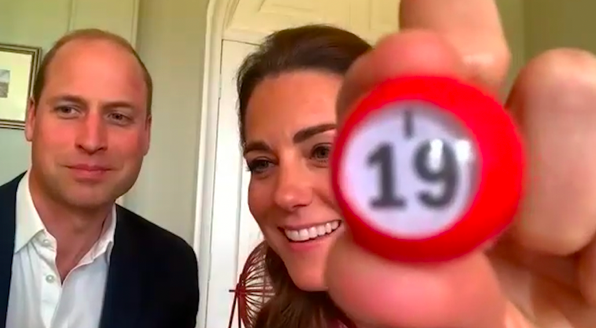 Kate announced the first number out saying ‘so the first number is five and eight, fifty-eight’. The future King then announced “one little duck, number two”. The game continued until one of the residents, Joan Drew-Smith, shouted ‘house!’ and announced she had won! The Duke and Duchess gave their congratulations to Joan who asked how the Royal couple were doing, to which William replied they were both doing and asking Joan how they’d performed as bingo callers.

‘Not as good as it should have been’

According to Joan, the Royal couple should probably stick to their current Royal roles as their performance “wasn’t as good as it should have been!”. This resulted in the Cambridges and care home staff, laughing and giggling at her honesty. Another resident also added her opinion on their performance saying “They haven’t done so well in the bingo there”.

Gracious in their responses, the Duke laughed along and admitted that both he and Kate certainly had room for improvement and would do better next time, signing off with “We’ll say a big thank you and goodbye to everybody. We’ll try and do a bit better at bingo next time.”